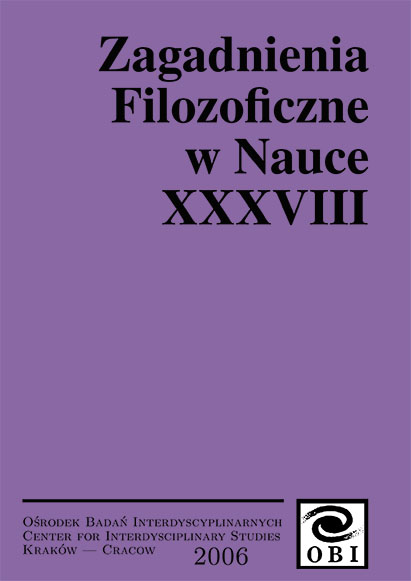 The so-called 'miracle argument', or the argument from the success of science, is probably one of the best-known arguments in favor of scientific realism. We first present a short history of philosophical anticipations of the main idea, which can be found in the works of C. Clavius, W. Whewell and P. Duhem. Then we consider three 'classical' versions of the 'miracle argument' proposed by J.J.C. Smart, H. Putnam and R.N. Boyd. The views of three other authors (B. van Fraassen, L. Laudan and A. Fine), critical with respect to the argument, are also briefly presented. We suggest a possible development of the 'miracle argument' by taking into account other aspects of the success in science, such as: success in the road to unification, effectiveness of mathematics in the natural sciences, success of laboratory technologies.

How to Cite
Rodzeń, J. (2006). What is a ’miracle argument’? An attempt of defense of scientific realism based on the fact of the scientific success. Philosophical Problems in Science (Zagadnienia Filozoficzne W Nauce), (38), 3–34. Retrieved from https://zfn.edu.pl/index.php/zfn/article/view/310
Issue
No. 38 (2006)
Section
Articles